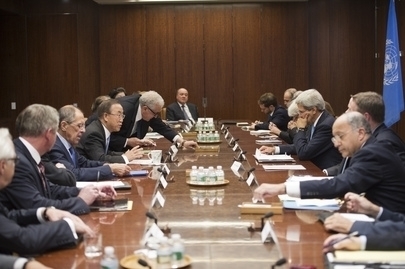 The sources told Italian AKI news agency, "The Coordination Commission has decided to attend the meetings with the UN envoy in Geneva, and named a delegation that consists of: the General Coordinator, Hassan AbdulAzim, Ahmed al-Asrawi, Safwan Akash, Saleh an-Nabawani and Yahya Aziz – who are the leaders of the Commission". The agency said the Commission decided to meet with the Coalition before meeting with UN Special Envoy to Syria Staffan de Mistura in Geneva on May 9. However, the Commission stipulated that this meeting should not include any member of the Muslim Brotherhood in Syria, the largest bloc inside the Coalition.

The sources claimed the Commission’s leadership wishes to expand its delegation, sending De Mistura a list of Executive Office members who can leave Syria, arguing that “the Commission requires many of its members to conduct consultations with parties other than De Mistura”.