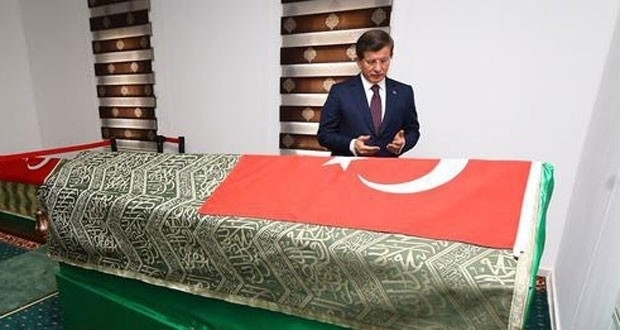 Turkish Prime Minister Ahmet Davutoglu crossed into Syria to visit the historic tomb of Suleyman Shah, grandfather of the founder of the Ottoman Empire, near Syria’s border with Turkey.

Damascus views the unauthorized visit, which happened without the Syrian government’s consent, as a flagrant act of aggression against a sovereign country and a grave violation of international law.

Many see the move as a publicity stunt in the lead up to parliamentary elections this June as approval ratings of the ruling Justice and Development Party markedly slumped.

Turkish Special Forces, aided by ISIS fighters, relocated the historic tomb earlier in February in an operation violating a 1921 treaty between Turkey and France.

The tomb was carried from Jaabar Citadel on the Euphrates to Ashma village, 200 meters from the Turkish border.

Originally located in an ISIS-controlled area, the tomb was spared by the terror group as it laid waste to all mosques, churches and tombs in the vicinity, lending authenticity to accusations of Ankara’s support for terrorists inside Syria.

The relocation of the tomb prompted the Syrian Foreign Ministry to appeal to the United Nations, demanding prompt measures against the Turkish government for what it described as a “flagrant violation of Syria’s sovereignty”.