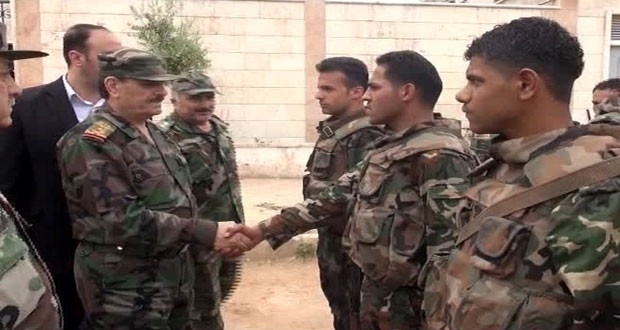 Minister of Defense Fahd Jasem al-Freij visited several military units and checkpoints in the city and countryside of Aleppo on Tuesday.

Accompanied by a number of officers, Freij met with Syrian soldiers while inspecting conditions of their mission in their war against terrorist organizations.

He said he appreciates efforts by heroes of the army, day and night, to protect the dignity of the Syrian homeland and its people.

“What Syria faces today, of unprecedented terrorist escalation and fabricated propagandas, are clear expressions of the failure of conspiracy powers and their bankruptcy in achieving their colonial project, particularly in light of the heroic achievements of our soldiers in many regions of the country”, Freij said.

The minister affirmed the army’s general leadership is proud of the sacrifices of its soldiers and officers in Aleppo and the remaining parts of Syria.

The army soldiers, for their part, affirmed they would remain loyal to Syria’s soil as defenders of its dignity to restore peace and stability to the whole country.