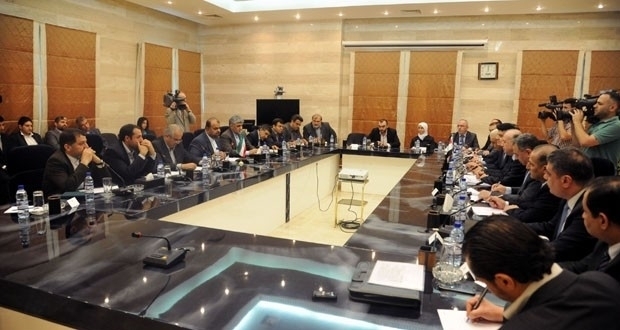 Syrian Prime Minister Wael al-Halki met with head of the Committee for Development of Iranian-Syrian Economic Relations Rostam Ghasemi on Monday to discuss implimenting agreements on the boosting of economic, commercial, industrial, and technical cooperation between the two countries.

The officials also discussed means to provide the Syrian market with its petroleum needs, as well as pharmaceuticals, medical equipment, and spare parts for factories, facilities, and power stations, in addition to procuring consumer goods and the necessities for agricultural and water resource sectors.

Halki called for a strategic map to further develop growing Syrian-Iranian relations and meet the local market’s needs in light of the unjust embargo imposed on Syria, adding that Iranian companies will have priority in the reconstruction stage with projects for rehabilitating infrastructure damaged by terrorism.

Ghasemi reasserted Iran’s support for the people and leadership of Syria and its commitment to expanding relations between the two countries.

Official talks were also held on implementing the economic cooperation agreement signed by the two countries in March, between Ghasemi and Secretary of the Cabinet Taisir al-Zoubi.

The meeting touched on prospects of cooperation in the fields of investment, trade, industry, energy, health, and pharmaceuticals, in addition to revising the free trade agreement and implementing other signed agreements.