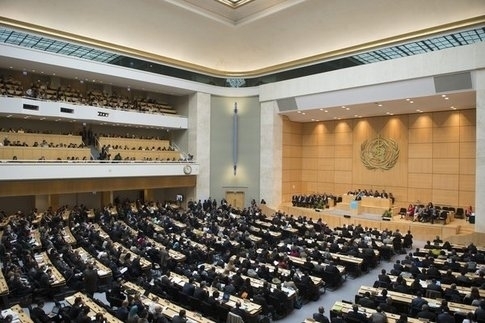 The 68th World Health Assembly commenced on Monday, as officials from 194 member states begin an annual review of the World Health Organization (WHO) with an aim to determine the organization’s future policies.

At the assembly’s opening session, Chairman of the Syrian delegation, Minister for Health Nizar Yazaji, was elected a member of the assembly's General Committee.

Speaking to the assembly, WHO Director-General Dr. Margaret Chan pointed to current health issues facing the world today, highlighting the organization’s efforts to fight diseases and epidemics and to preserve general health.

“The health system in Syria has proven its technical competence in responding to health demands of the citizens in light of the crisis the country is passing through,” Minister Yazaji said in a statement to SANA.

The Syrian minister met with WHO Regional Director for the Eastern Mediterranean Ala al-Din Elwan and Resident Representative of the WHO in Syria Elizabeth Huff to discuss Syria’s cooperation with the origination, including local and regional health issues and the latest developments in combating polio.

Elwan said WHO has a big interest in responding to the increasing demands of people affected by the crisis in Syria.