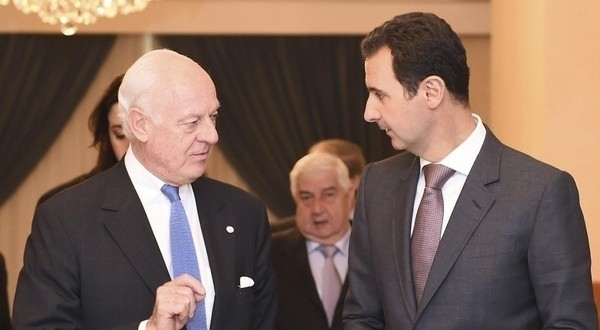 Bashar al-Assad has reportedly told United Nations Special Envoy to Syria Staffan de Mistura that the regime’s priority is a military solution because "the state's duty is to eliminate terrorism", a political source in Damascus has revealed.

According to the source, the UN envoy requested Assad to comply with several procedures, including an end to the regime’s barrel bomb campaign, establishing safe paths to besieged areas, and the release of a number of political prisoners. Assad is said to have responded to the request stating that a military solution must come first, only then a political solution may follow.

The president continued to deny the regime’s use of explosive barrels, claiming that Syrian warplanes use the same shells as all other armies of the world, however, "we will try to mitigate them as much as possible", he said.

According to the source, de Mistura also suggested conducting early presidential elections, but Assad is said to have refused, stating the security situation in the country would not allow such a move, even under international supervision.