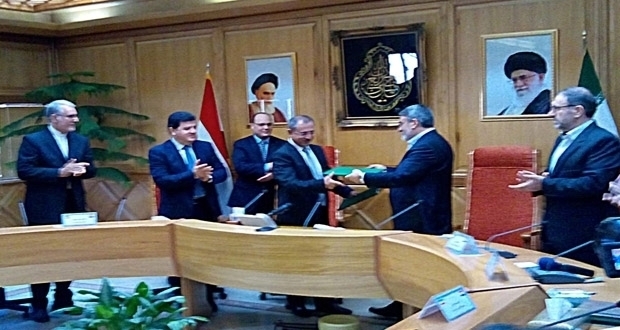 Other issues covered in the MOU include the exchange of personal information on citizens who commit crimes, and conducting joint research in the field of forensics.

The two officials held a press conference after the signing, in which the two ministers said that the MOU would help boost bilateral relations and further contribute to counterterrorism efforts.

The signing of the MOU followed a meeting where the two ministers discussed the boosting of strategic cooperation, and mechanisms of coordination between interior security forces in both countries to face the threat of terrorism.

Means of facing organized crime and the flow of terrorists supported by Israel, the West, and other countries in the region, were also discussed at the meeting.

Gen. Shaar focused on the importance of professional cooperation between the two ministries and ways to benefit from IT systems, modern methods of training, and the exchange of expertise and information on the financing of terrorists and their movements across borders.

“Syria’s leadership is determined to fight terrorists and terrorism on one side, and rebuild what terrorism has destroyed on the other,” Shaar said.

Shaar also met with Iranian Minister of Intelligence and National Security Mahmoud Alavi and Commander of the Internal Security Forces in Iran, Brig. Gen. Hossein Ashtari, to discuss bilateral relations and cooperation, particularly in relation to the combating of terrorism

The two ministers also discussed the upcoming tripartite meeting of the interior ministers of Syria, Iraq, and Iran, to be held in Baghdad next week. The meeting will mainly focus on coordination in fighting regional terrorism.