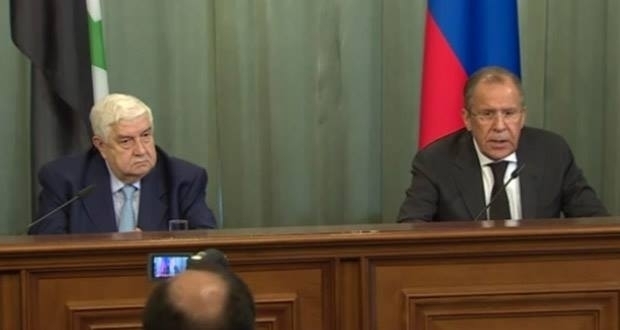 Speaking at a joint press conference in the Russian capital on Monday, Muallem told reporters that Putin had stressed the need to build a regional counterterrorism alliance, stating: “I know that president Putin is a man capable of working miracles, which he did in the Russian Federation, but an alliance with Turkey, Saudi Arabia, Qatar, and the United States to combat terrorism requires a very big miracle”.

Muallem voiced skepticism over support for such an alliance from these states, as all have conspired against Syria, encouraged, funded, and armed terrorism, the minister said.

“We think that the safest way to prepare for a successful conference in Geneva goes through Moscow”, said Muallem, offering a public invitation to UN Special Envoy for Syria Staffan de Mistura to attend a third round of Moscow-held talks.

Speaking alongside the Syrian minister, Russian Foreign Minister Sergey Lavrov said Muallem and president Putin also agreed on the need to employ an “objective analysis” of the current situation, while involving all regional forces in the fight against terrorsim, including neighboring countries like Saudi Arabia, Turkey and Jordan.

“All countries in the region should put aside their differences and focus on unifying their efforts to fight the general threat, which is terrorism,” Lavrov said. The success of such a mission, the Russian minister added, could be the next step towards a successful political solution involving the Syrian government and all opposition forces combining efforts to fight terrorism inside Syria.