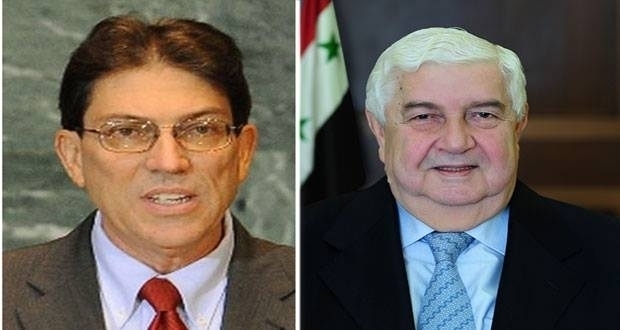 Cuban Foreign Minister Bruno Rodriguez openly expressed his country’s solidarity with Syria in the face of the country’s four-year civil conflict, stating the government and people of Cuba will continue to support Syria as it wards off any attempt to disrupt its independence, sovereignty and territorial integrity.

Responded to Rodriguez’s remarks in a letter to the Cuban government, Syria’s Foreign Minister Walid al-Muallem hailed the historical friendship binding the two countries on the occasion of the 50th anniversary of Cuban-Syrian diplomatic relations.

Muallem noted that ties between the two nations have been steadily developing as they are based on solid principles, namely maintaining national sovereignty, preventing interference in internal affairs, and supporting the just causes of people in the face of hegemony.

Cuba’s victory in ending the Western-imposed sanctions would enable it to bolster its achievements and development, said Muallem, expressing appreciation for Cuba’s supportive stance towards Syria against the conspiracy targeting it.