Envoy's statements are “far from objectivity and facts” and are based on information promoted by groups known for their hostility towards Syria, says official ministry source 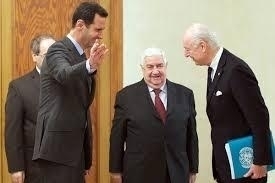 Syria’s Foreign Ministry Tuesday took a swipe at UN Special Envoy for Syria Staffan de Mistura for his lack of neutrality, as seen in the top diplomat's latest statements.

An official ministry source criticized de Mistura’s statements, claiming they are “far from objectivity and facts” and are based on information promoted by groups known for their hostility towards Syria.

“We hoped that the UN envoy would have condemned the shelling carried out by the armed terrorist organizations on the cities of Aleppo, Lattakia and Daraa,” said the statement.

It also slammed the envoy for not condemning the cutting of water and electricity by rebels in Aleppo city for a number of weeks, or the massacres committed by ISIS, the Nusra Front and other Al-Qaeda-linked organizations in Syria.