Heavy-handed policing tactics have resulted in the reported death of a child in the Turkish camp of Derik, source tells Zaman al-Wasl 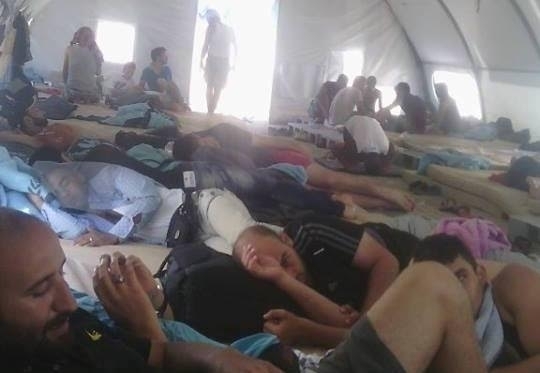 A girl has died in Derik camp for Syrian refugees near the Turkish city of Mardin on Monday after authorities used tear gas, rubber bullets and water to suppress protests inside the camp.

A Zaman al-Wasl source, who preferred to remain anonymous, said many Syrian youths protested inside Derik, threatening to go on hunger strike in protest at the indiscriminate arrests which brought them to the over-crowded camp.

The source mentioned that the mass arrests have targeted Syrians in a number of Turkish cities since Monday where young people, women and even the elderly were arrested, under the guise of curbing illegal immigration. The source confirmed that many of those arrested in the camp have permission to reside inside Turkey.

The source mentioned he was arrested with his friends while eating in a restaurant in Izmir, where the police attacked them and arrested them for not renewing their residency permit to stay in the country. The group was forced to sign papers in Turkish without the presence of an interpreter, only later to discover that they signed a confession of street begging, the source said.

The group was later transferred to Derik camp where they have remained for a week without any contact from an official body.

The camp’s residents suffer from over-crowded and harsh living conditions, along with a shortage of drinking water and food, which has only exacerbated the spread of disease and infection throughout Derik.