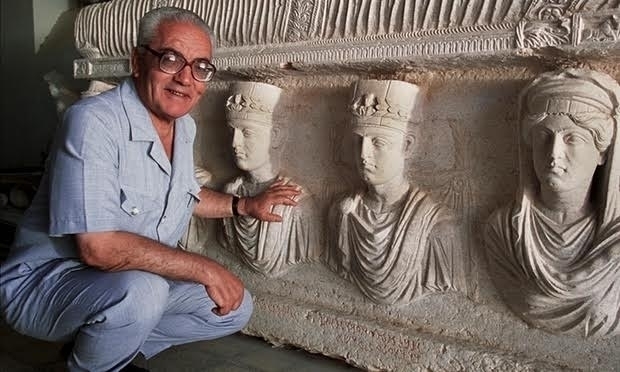 Syrian state antiquities chief Maamoun Abdulkarim has condemned the beheading of former director of the department of antiquities in Palmyra, Khaled al-Asaad, by the Islamic State in Iraq and Syria (ISIS).

Quoting local sources in Palmyra city, Abdulkarim told SANA that ISIS terrorists beheaded the 80-year-old archaeologist in cold blood, later crucifying and hanging his body on a column in the city’s main square.

Abdulkarim added that ISIS had brutally interrogated him for refusing to reveal where valuable artefacts had been hidden for safekeeping.

The chief of antiquities described Asaad as a pioneer and one of the most prominent Syrian archaeologists of the 20th century.

Abdulkarim said Asaad headed the Department of Palmyra Antiquities and Museums between 1963 and 2003, and worked as an expert at the General Department after retirement, where he participated in developing scientific archaeology strategies.

The late archaeologist accomplished great achievements in the restoration of a large number of archaeological pieces and artefacts, as well as participating in scores of national and joint excavation expeditions, mainly in Palmyra.

Born in Palmyra, Asaad participated in the Palmyra Development Project between 1962 and 1966, where he unearthed the largest part of the Great Colonnade, the Great Tetrapylon of Palmyra and a number of Byzantine cemeteries, caves and tombs.

Asaad worked for a number of Arab, regional and international institutions, including UNESCO, the European Commission and the EU regarding projects related to Palmyra and ancient Syrian ruins.