“We open our hands to every Arab initiative. We say hello to those who knock on our door as we seek to stop the bloodshed,” Syria's foreign minister tells Egyptian press 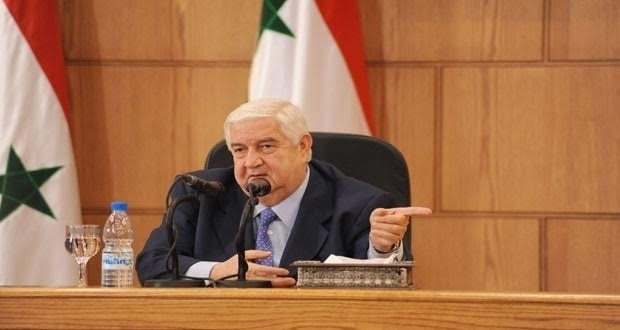 Foreign Minister Walid al-Muallem stressed on Thursday that Syria welcomes any Arab initiative aimed at solving the crisis in the country.

“We open our hands to every Arab initiative. We say hello to those who knock on our door as we seek to stop the bloodshed,” said Muallem in an interview with the Egyptian al-Nahar TV channel.

Asked about Syria’s ties with Iran and Lebanese Hezbollah, he said: “some are worried about our relationship with Iran and Hezbollah because of our unified stance towards Israel.”

Muallem described Syria’s relationship with Iran, Russia and China as one of mutual respect, adding that it was the Arabs who quit their role towards Syria.

The minister slammed the silence and the conspiratorial role of most Arabs in relation to Syria “at a time when Iran rushed to our side.”

Muallem responded to questions on the deterioration of Syria’s relationship with Egypt and Saudi Arabia by saying Cairo and Riyadh should be questioned for their role in abandoning Syria, adding that Syria has always defended the Arab cause.

The top diplomat, however, hailed “Egypt’s revolutions”, the toppling of the Muslim Brotherhood and the confronting of the Islamic State (ISIS) in the Sinai.

Muallem explained the recent Syrian-Turkish dispute was triggered in 2011 when the Syrian leadership rejected a request by Ankara to allow the Muslim Brotherhood to share power.

“We said no because the Muslim Brotherhood is a terrorist organization and it has been since 1980,” he added.

Dismissing the so-called “Arab Spring” in the region, Muallem said the revolts only further served Israel’s interests, adding: “We are destroying each other and Israel applauds.”

Muallem called for implementing the UN Security Council’s counterterrorism resolutions and pressuring countries to stop financing and arming terrorist organizations in order for a political solution in Syria to be reached.

The solution to the crisis, he said, requires great efforts, expressing optimism over Iran’s role in helping to reach a solution, adding that Egypt could also have a role if it wished.

Muallem explained it is natural for the Syrian state to use the appropriate tools in fighting terrorism, noting: “as long as the Syrian army is determined, firm and ready to make sacrifices, this is a cause for optimism.”

In a later interview with the Egyptian al-Akhbar newspaper, Muallem stated the UN Security Council’s presidential statement adopting UN Special Envoy for Syria Staffan de Mistura’ plan to solve the crisis in Syria is aimed at “buying time until October”, when a decision on Iran’s nuclear deal will be made.

“De Mistura thinks if the U.S. administration would get the Congress’ approval of the nuclear deal with Iran, that would give Iran momentum to take part in solving the crises in the region,” said Muallem.

The foreign minister criticized de Mistura for turning his position of neutrality into a source of statements based on propaganda and misinformation, adding that he rejected de Mistura’s silence on the shelling of the cities of Damascus, Aleppo and Lattakia, and the cutting off of water in Aleppo by the opposition forces.

Asked whether secret lines of communication exist between Washington and Damascus, Muallem said: “There are no contacts with Washington, and we don’t work under the table … Whoever wants to talk with us and have the courage to do that, let it be in public because we have nothing to hide or be afraid of.”

Muallem reiterated that establishing a so-called “safe zone” in northern Syria would be an act of aggression against Syria’s national sovereignty and “a cheap exploitation by the Turkish regime of the security situation in Syria.”

Questioned about a reported visit to Damascus by a Turkish officer, the foreign minister said that a former Turkish officer affiliated to a Turkish opposition party came to Damascus and said he was commissioned to discuss coordination between the Syrian and Turkish armies to fight ISIS.

Nevertheless, Muallem said, “we are pretty sure that the ruling party in Turkey – the Justice and Development Party – would not fight ISIS for ideological reasons.”