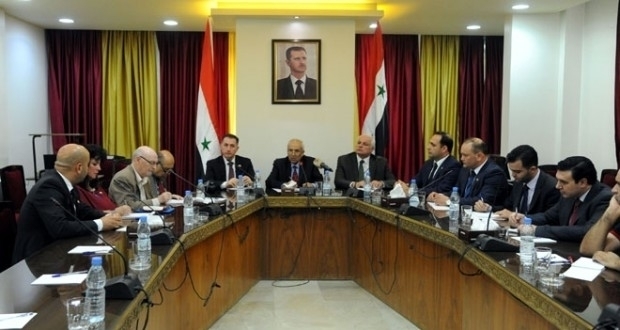 Belgian and Dutch delegates and political activists said on Saturday that the goal of their visit to Syria was to express solidarity with the country in the face of organized terrorism that the country has been subjected to.

The delegation met with deputy speaker of the People’s Assembly Fahmi Hassan, who stressed that the international community should confront the crimes committed by Syria-based terrorist organizations, especially since they have become a threat to the world.

Hassan affirmed that Syria supports any political solution or initiative that would safeguard its unity and sovereignty, noting that “the Syrian opposition overseas” does not have a popular root in Syria and is subordinate to regional players that seek to realize their own interests. Malek Samuel, the chairman of the National Committee of Syrian Expatriates in the Netherlands, said that Syrian expatriates would never hesitate to support their homeland and stand by her side during the war against terrorism and the post-crisis reconstruction.

The delegation also met with Hilal al-Hilal, the assistant regional secretary of the Baath Arab Socialist Party, who called upon Europe to abandon its double standards towards the Arab world in general and the Syrian civil war in particular. Hilal also urged Europe to pursue clear-cut policies based on respect for national sovereignty.

The delegation said that life is running normally in Syria and that people are engaging in their daily activities as usual – contrary to what certain TV channels try to promote.