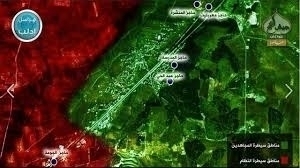 On Friday, the Fatah Army advanced towards a military airbase that is the last regime-held facility remaining in the northwestern province of Idleb, according to activists and monitoring groups.

The Syrian Observatory for Human Rights said that the alliance of Islamist groups led by Al-Qaeda-affiliated Nusra Front “seized the entrance” to the Abu Duhur airport after carrying out several suicide bombings on motorbikes and “seizing several positions on its outskirts,” AFP reported.

State-run media reported that the Syrian army “killed a large number of Nusra terrorists and destroyed their arms and equipment” at the facility.

The Syrian Observatory said that air strikes were launched in response to the onslaught, and that 16 Syrian soldiers and 18 rebels were killed in the fighting.