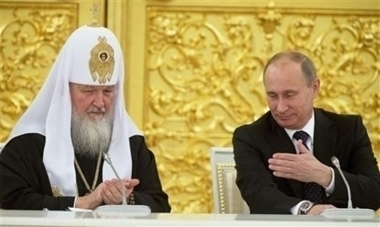 The Syrian Christians for Peace group issued the following statement in response to the Russian Orthodox Church's support for Moscow's "holy war" in Syria:

We, at Syrian Christians for Peace, based on the belonging to our nation and our deep faith in the right of peoples to self-defense and self-determination, and our rejection of violence, injustice and terrorism in all its forms, severely condemn the religious and doctrinal statements by the Russian Church and reject any attempt to exploit their message.

These statements condone perverted and absurd ideological conflicts and we wish to make clear that the statements of the Russian Church do not represent Christians, nor do they reflect our convictions and aspirations. We emphasize our categorical rejection of the concept of a Christian holy war, and reject any war under any religious name or cover.

We, at the Syrian Christians for Peace organization, condemn this statement in its entirety as it reflects a political statement and should not have been issued by a cleric presiding over the highest ecclesiastical authority in the Russian Federation. It is therefore unacceptable.

The organization calls upon all churches inside Syria to condemn such statements, in order to preserve coexistence in our country and disengage with the Assad regime, which causes most of the damage to Christians in the region. Christians should let their mind govern their words and statements.