The foreign ministers of Russia, US, Turkey and Saudi Arabia said they will reconvene next week, invite other regional powers 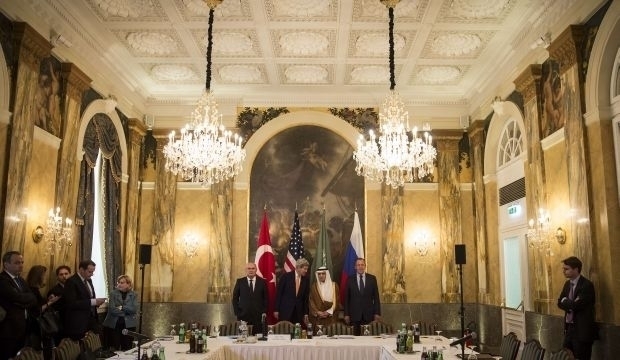 Russia has proposed forming a transitional government in Syria and freezing fighting between government forces and Western-backed rebel factions amid ambiguity about the fate of President Bashar al-Assad, according to Turkish and Syrian sources familiar with the plan that aims to end more than four and a half years of fighting there.

Russia put forward the nine-point plan during a meeting between its foreign minister, Sergei Lavrov, and his American, Turkish and Saudi counterparts in Vienna on Friday aimed at exploring a possible political solution to the grinding war in Syria.

Speaking to Asharq Al-Awsat on the condition of anonymity, Turkish officials and Syrian opposition figures said the Russian proposal could serve as a “starting point” for a comprehensive solution but demanded guarantees for its implementation and clarification about the fate of Assad.

The Russian plan calls for freezing fighting between the Western-backed Free Syrian Army and government forces, lifting sieges on opposition and government-held areas, and holding parliamentary and presidential elections but does not set a clear time frame for the implementation of these steps.

According to the source, the Russians proposed a time frame of 15 to 18 months from the date of signing the plan, something which has met objections from countries supporting Assad’s enemies.

The proposal calls for integrating pro-government militias and the Western-backed rebel group into the regular army at a later stage of its implementation.

Countries engaged in air strikes in Syria are required under the plan to prepare a list of shared targets and include on it the factions that oppose a political solution, the source said.

Both Moscow and Washington are targeting the Islamic State (ISIS) group in Syria with airstrikes. But while Russia is a key ally of Damascus, providing the Syrian government with political and military support, US sees Assad as part of the problem.

The proposal also includes a personal pledge from the Russian President Vladimir Putin that Assad will not participate in the elections. However, it does not prevent members of Assad’s family or Syrian government figures from standing for the elections.

The plan will enable Russia to keep its military bases in Syria under a UN Security Council resolution.

Jubeir reiterated the kingdom’s support for a political settlement in Syria on the basis of the Geneva communique of 2012 which calls for a transitional government and a united Syria.

In televised remarks after the meeting, Lavrov said: “We discussed the need to find a way out of this crisis and we confirmed that we have common goals, there is no doubt about it: to stop the war, to fight more effectively the terrorists who threaten to seize this country and to more actively develop the political process on the basis of principles coordinated in the Geneva communiqu