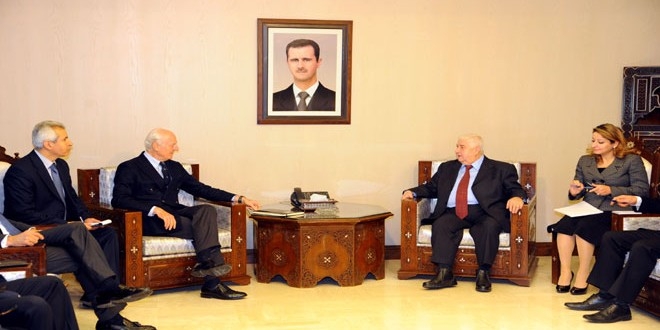 Deputy Prime Minister Walid al-Muallem has highlighted Syria’s desire to continue its cooperation in combatting terrorism and push for a dialogue between Syrians, adding that “Syria is ready to take part in Geneva meetings at the appointed time.”

During a meeting on Saturday with the UN Special Envoy to Syria, Staffan De Mistura, Muallem also affirmed the importance of respecting UN Security Council’s resolutions, particularly those related to combating terrorism.

The deputy PM stressed the importance of creating a list of terrorist organizations and another containing the names of the Syrian opposition sides that will join the Geneva talks, to ensure terrorist groups will not be represented.

During an earlier meeting with the UN envoy in November, Muallem stressed that any counter-terrorism effort not coordinated with the Syrian government would constitute a breach of the principles of the UN Charter, and would be incompatible with the ultimate goal of countering terrorism.