Russia “is insistent on dragging names into the list of the Syrian opposition delegation to the Geneva negotiations, with the aim of derailing the talks and gaining time to improve its allies’ military position.” 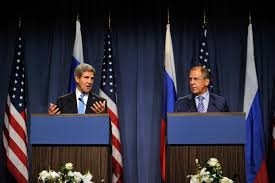 Controversy around the issue of the upcoming Geneva talks between the Syrian regime and opposition continued yesterday, as Saudi Arabia rejected that “any party” impose a delegation on the Syrian opposition to represent them at the talks. Meanwhile, diplomatic sources in New York blamed Russia for obstructing the launch of the Syria-Syria talks next Monday “by imposing names” it wants included in the opposition delegation.

Fabius stressed the need to “respect the results” of the Syrian opposition conference held in Riyadh, because it brought together the main opposition constituencies. He called on the UN envoy Staffan de Mistura to agree to the high committee emerging from this conference for the Geneva talks. Fabius also stressed the importance of stopping the bombardment of civilians, as well as enforced starvation, before the negotiations.

The Saudi and French positions came after information about a new offer the Russian Foreign Minister Sergei Lavrov will present to his American counterpart John Kerry during his meeting with him in Zurich today.

The offer stipulates that the opposition will be represented by two delegations, “the Russian list” and “the Riyadh list”, and which both include “the same number, the same powers, and its own political authority”. Negotiations would be held between the two lists in Geneva to pave the way for negotiations between representatives of the government and the opposition.

Meanwhile, political sources in New York blamed Russia for putting obstacles in the way of the launch of the Syria-Syria talks, and said that Russia “is insistent on dragging names into the list of the Syrian opposition delegation to the Geneva negotiations, with the aim of derailing the talks and gaining time to improve its allies’ military position.”

The sources added that the Syrian opposition conference hosted by Riyadh last month was held by inviting “everyone recommended by the special envoy to Syria, Staffan de Mistura, to participate, including Haytham Manna, who apologized” for not joining.

The sources doubted the possibility of holding the Geneva talks on January 25 “since de Mistura has not presented the invitations yet, and the date is getting very close.”