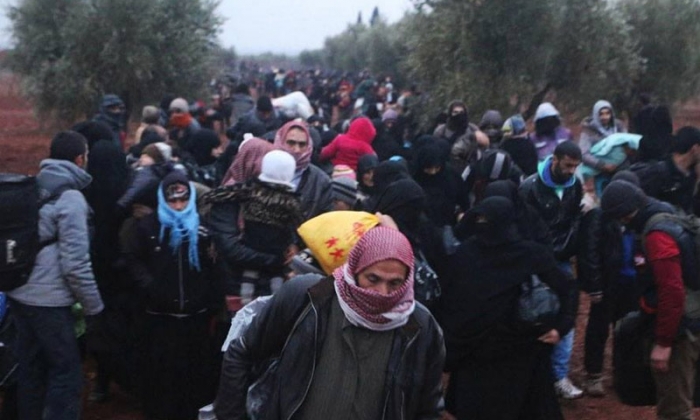 Dozens of families have fled the city of al-Bab, east of Aleppo, to the Turkish border area. The city’s coordination committee said the civilians fled the Islamic State group and air strikes targeting the city by Assad’s forces and Russia.

The coordination committee said in a statement on its Facebook page Sunday, January 24, that the Turkish authorities had so far refused to allow them to enter through official land borders or even through smuggling routes.

The coordination committee condemned the Turkish government’s refusal to allow families fleeing al-Bab to enter Turkey, and held international and local organizations “fully responsible for what has resulted in the state of the families, who are sleeping on farmlands in freezing weather.”

Enab Baladi’s correspondent in Aleppo said about 1,200 civilians were fleeing al-Bab, including women, children and the elderly.

Their flight coincides with the advance of Assad’s forces and its allies on al-Bab and their capture of a number of villages in the area, most prominently al-Najara, Aisha, al-Sareeb, al-Meltfeteh, and al-Ajouziyeh, indicating these villages are the first line of defense for al-Bab.

Al-Bab is one of the largest cities in the eastern Aleppo countryside, and has been under the control of the Islamic State group since the start of 2014. Assad’s forces have been trying to regain control of the city since they succeeded in breaking the siege of the Kuweires airport to the south.