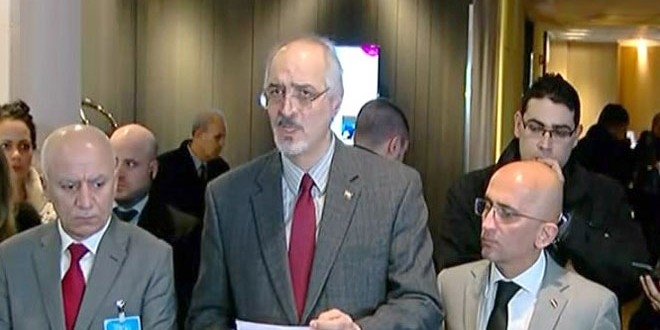 Speaking to reporters in Geneva, Jaafari said: “Our delegation believes that any political solution to the crisis in Syria can’t be achieved without the presence of a serious party to the dialogue process.”

He made clear that the terms of UN resolution 2254 and that of the invitation addressed to the Syrian government have not been respected, referring to the opposition delegation’s delayed attendance at Geneva, which he said was a sign of a “lack of seriousness and responsibility”.

“We want to implement what was previously agreed on. We don’t want to start from scratch as that would be a waste of time at the expense of the Syrian people’s pains,” he said.

Syria’s delegation, he noted, stressed to UN envoy for Syria Staffan de Mistura its readiness to work for finding a solution to end the crisis as long as there are parties with a serious will to work to that effect.

“We have proved our good intentions and the government’s positive attitude towards any international UN effort to find a solution, but the problem has always been with the other party,” said Jaafari.

If the opposition are serious and keen to solve the crisis, he added, they should come to Geneva with a national agenda in line with resolution 2245 and the two Vienna statements.

“No one up [until] the present moment knows who the other party is, and there hasn’t been a final list of the participants so far,” said Jaafari

He confirmed that the UN remains without a final list of participants from the opposition side, pointing out that there are regional, Arab and international sides who are trying to force things back to square one through insisting on imposing a single opposition representation.

Some parties and countries are repeating the same mistake that occurred in Geneva II, he added.

“When the Security Council resolution states that the broadest possible spectrum of the position be brought together by the Syrians themselves, and this resolution is being violated, then it means that there are some who want to impose a fait accompli by selectivity and double standards,” said Jaafari.