Opposition's demands for preconditions is a sign of a lack of political experience and an understanding of international resolutions, top Syrian negotiator tells reporters 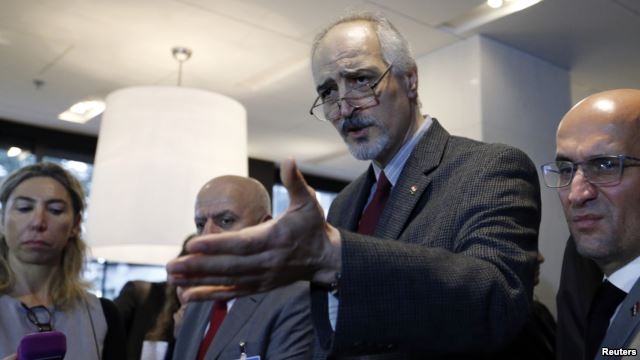 Head of the Syrian government delegation in Geneva, Dr. Bashar al-Jaafari, has questioned the seriousness and responsibility of the opposition's negotiating team, citing delayed attendance and the fact that the names of its members remain unknown.

Speaking to reporters in Geneva, Jaafari said that any political solution for the crisis in Syria can’t be achieved without the presence of a serious party to the dialogue process, reaffirming that the interest of the Syrian people is the compass for the Syrian government delegation and must be the compass for all dialogue.

Jaafari said that those who have demanded preconditions are amateurs in politics, adding: “It means that they are coming to the Geneva meeting to undermine it, and that they aren’t keen on the success of the Syrian-Syrian dialogue."

"It is also a sign of a fragile mentality, a lack of political experience, and lack of understanding of the resolution 2254 and the Vienna statements,” he said.

“We want to implement what was previously agreed on. We don’t want to start from scratch as that would be a waste of time at the expense of the Syrian people’s pains,” Jaafari said.