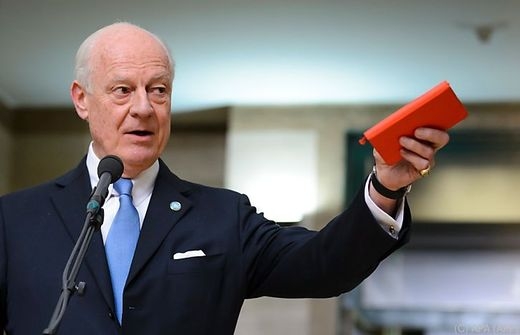 No one attending the Geneva peace talks, including United Nations envoy Staffan de Mistura and the heads of the two Syrian delegations, can foresee how events will unfold in the coming days, a senior opposition figure told The Syrian Observer.

The member, who spoke on condition of anonymity Monday, added, "If any one tells you what might happen tomorrow, they would be only predicting."

A small delegation of the opposition met with de Mistura Monday in the UN headquarters, where the special envoy made a quick statement announcing the official start of peace talks between the Syrian government and opposition leaders.

De Mistura said the mere arrival of a delegation from the main Syrian opposition group, the High Committee for Negotiations (HNC), at the UN offices in Geneva was enough to declare the talks formally open. The envoy previously met with the Syrian government delegation on Friday.

“We will raise only three issues during our meeting with de Mistura: lifting the sieges, ending Russian bombardment of mainstream rebels and civilians, and releasing political prisoners and detainees, most importantly women and children,” Zoabi added.

The speical envoy did not elaborate on why the regime's team did not attend the scheduled meeting on Monday with him. But the Syrian official news agency SANA said the meeting was postponed because de Mistura wanted to meet with the Syrian opposition delegation before meeting the regime delegation again.

On a different note, the High Committee announced the formation of an advisory body to represent women, comprised of 40 women who will act as consultants and will contribute to the negotiation process. The committee said the move was taken from the realization of the pressing need for the effective participation of Syrian women within the HNC and the affiliated negotiating team.

In a statement released Monday, the High Committee said the new body “would result in raising the HNC’s level in terms of representation and expertise as [it] considers making use of Syrian expertise and national potentials as a guarantee for the success of the HNC and its teams as well as the success of the political process.”

In the meantime, civil society activists continued their meeting to show support for the High Committee’s decision not to negotiate the humanitarian issues which had been approved by UN resolution 2245.

On Thursday, the Transitional Justice Coordination Group, an alliance of 15 Syrian NGOs, will hold a side event to demonstrate their position regarding the issues of accountability and reparation.