Syrian government delegation will not accept any preconditions from any party prior to commencing indirect negotiations with the Syrian opposition in Geneva, chief negotiator tells reporters 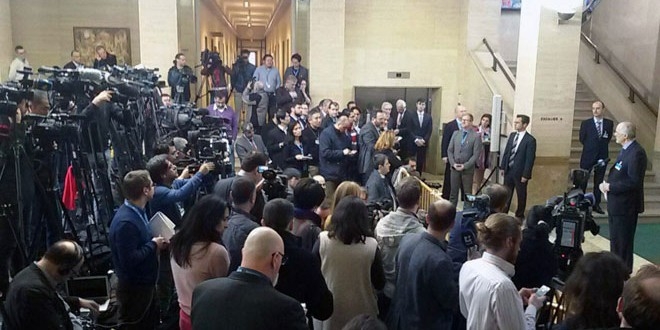 Jaafari told reporters in Geneva after a meeting with UN Special Envoy for Syria Staffan de Mistura that “our delegation is committed to the text of the invitation letter addressed by de Mistura and that of (Security Council) resolution 2254, whereas the other party is dealing with this matter like amateurs and not professional politicians.”

He explained that in line with resolution 2254, the dialogue held in Geneva is among Syrians and led by the Syrians themselves, without preconditions and without foreign interference, stressing that this is a key phrase for understanding why the government delegation agreed to attend the talks.

“The selection of the oppositions’ delegations, according to resolution 2254, is a Syrian-Syrian affair, and isn’t imposed by Riyadh or anyone else,” he added, asserting that the Syrian people should decide on their own who will hold dialogue with the Syrian government’s delegation.

“We are still at the stage of preparations for the indirect talks, and we discussed with de Mistura the importance of this stage in figuring out with whom we will hold indirect dialogue. We don’t know until this moment who the other delegations that are supposed to represent the Syrian opposition are,” Jaafari elaborated.

“We asked de Mistura to inform us of the names of those who are going to participate and to prepare the agenda of this dialogue or these indirect talks,” he added, noting that he discussed with the UN envoy the press statement issued by the Security Council on Monday which denounced the terrorist bombings in Sayyeda Zainab in the Damascus countryside which claimed the lives of scores of Syrians.

Responding to a question, Jaafari stressed that all issues, whether humanitarian or related to combatting terrorism, are priorities for the Syrian government, adding all issues will be tackled as soon as indirect dialogue officially begins.

“So far, we’re still in the procedural, preparatory framework of the indirect talks, meaning that we’re waiting to know who [we] are holding dialogue with, and so far nothing is clear. Will there be one delegation or two, or three or four? There are no clear answers,” he explained.

Jaafari said that statements were made by some representatives of the opposition delegation saying they will withdraw on Thursday unless their preconditions are met, adding that he had received confirmation of this from the Saudi foreign minister and other opposition figures.

Regarding de Mistura’s statement on Monday that the talks had officially started, Jaafari said that this was the envoy’s interpretation of the conditions of the official launch of the negotiations, stating that the current stage is a preparatory stage because official talks require the attendance of all sides to be involved in the negotiations, something which is yet to take place.