Despite the daily horrors and dangers, civil defense workers have devoted their lives to saving and assisting the Syrian people in the most extreme circumstances 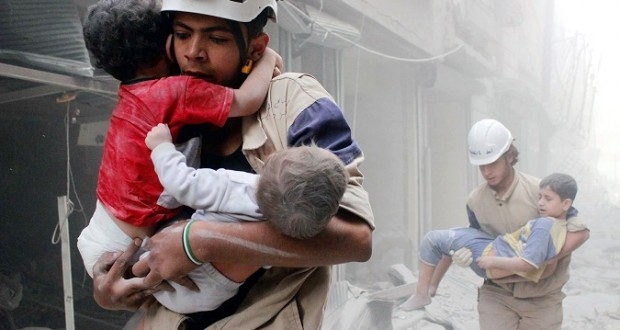 In Syria, with every video clip, or in most of the photos we see in the media, workers of the Syrian Civil Defense are on the scene. Affectionately known as “The White Helmets”, you see them rushing to rescue civilians and treat the wounded in areas targeted by Assad’s bombs and Russian warplanes.

On Tuesday, Russian warplanes hit villages in the northern Aleppo countryside with more than 250 air raids, in a continuation of its massacres of Syrian civilians. In the village of Haritan, one strike killed 14 civilians, most of them women and children.

What stood out from the scenes of the Haritan massacre was the appearance of a man from the civil defense in the video trying to recover a child of no more than three years from under the rubble, urging one of his colleagues to bring a pillow to place under the child’s head to reduce his suffering.

The daily massacres and shelling by Assad’s forces and Russian warplanes have not deterred the determination of those who have taken it upon themselves to save Syrians and provide them with support, even if it costs them their lives.

Last year, the civil defense administration in Aleppo province reported the death of 88 volunteers from the civil defense forces, killed by regime and Russian bombardment while carrying out their humanitarian duty, or while in the hospitals which were — and still are — main targets for Russian aircraft.

Civil defense workers have devoted their lives to saving and assisting their people from the oppression and hatred of the Assad regime, which has killed and displaced millions of Syrians. Before joining the civil defense, volunteers must to undergo a first aid training course, and possess the courage to work in brutal circumstances, such as aiding the wounded during bombardment and extinguishing fires.

Separate civil defense groups can specialize in a number of areas, such as treating water and electricity failures while others clean routes from debris resulting from bombardment.

Since the start of this year, countless civil defense workers have continued to be killed or wounded while carrying out their duties. Despite the horrors they witness and the dangers surrounding them, they are committed to the path they began five years ago at the start of the Syrian revolution.