Aid workers with links to the Syrian regime reported the comments to serve the interests of Assad, says US state department official 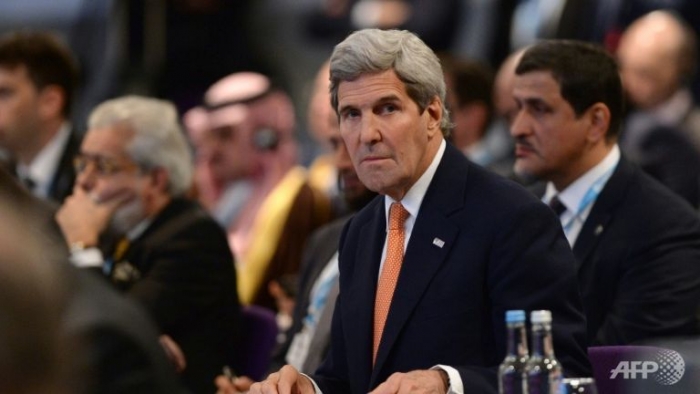 Secretary of State John Kerry’s statement to Syrian activists in London on the sidelines of the donor conference “was not for publication and was outside of the general context,” a US State Department official told al-Quds al-Arabi.

The official added that “the American position has not changed, and he is not sending messages to the Assad regime, indeed he’s calling on the Russians to pressure the regime to stop using rockets to terrorize its people. The US State Department is committed to supporting the moderate Syrian opposition even if it does not participate in negotiations.” “Kerry called on Russian Foreign Minister [Sergei] Lavrov throughout a number of phone calls to stop bombing the Syrian opposition and focus on the Islamic State group in Syria.”

The official said that “some of those working in the humanitarian field have links with Bashar al-Assad’s regime and they are the ones who reported this talk to serve the regime, which America does not acknowledge. Assad must leave, and enter negotiations to set up a transitional stage where there is no role for him, and there is no military solution to the conflict.”

According to Ashi, Kerry added that he anticipated three months of bombing, holding the opposition primarily responsible for the collapse of the Geneva talks.

A humanitarian activist who asked not to be identified revealed to the Middle East Eye website that Kerry said: “Don’t blame me — Go and blame your opposition.” The activist added that Kerry asked them, “What do you want me to do? Go to war with Russia? Is that what you want?”