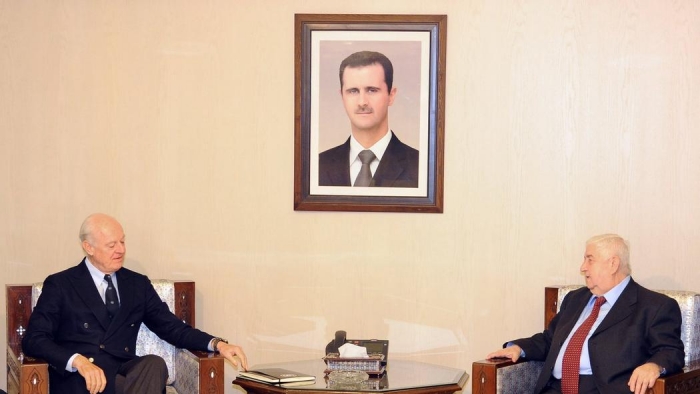 Foreign Minister Walid al-Muallem reaffirmed the Syrian government’s commitment to a Syrian-led intra-Syrian dialogue without preconditions, reiterating that the Syrian people alone have the right to determine the future of their country.

During a meeting with UN Special Envoy for Syria Staffan de Mistura and the accompanying delegation on Tuesday, Muallem said the Syrian government and its official delegation to Geneva have proven they are honest and sincere about the efforts to solve the crisis in Syria.

The foreign minister also reiterated the need to lift the unjust and unilateral measures imposed by the US and EU, which he said have contributed a great deal to increasing the suffering of the Syrian people.

De Mistura briefed Muallem on the suspended Geneva meeting and the ongoing work to relaunch talks between the Syrian government and the opposition groups later this month.

The meeting was attended by Assistant Foreign Minister Ayman Sousan, Advisor to the Minister Ahmad Arnous and the UN Resident Coordinator in Syria Yacoub El Hillo.

Following the meeting, de Mistura told the reporters that the talks also dealt with the issue of delivering aid to all besieged areas.