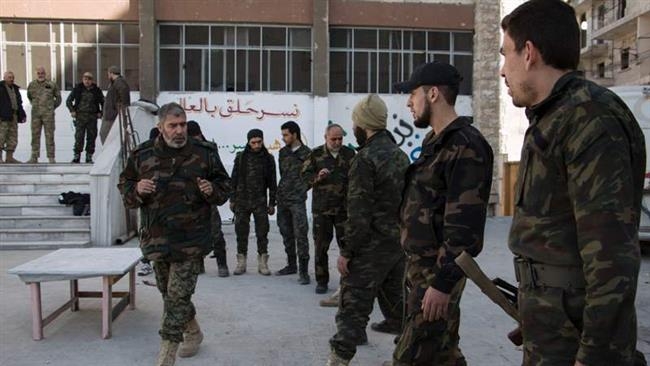 The official spokesman for the Levant Front rebel coalition, Colonel Mohamed Eid al-Ahmed, has denied that Syrian fighters entered through the Bab al-Salama border crossing with Turkey into the city of Azaz in the northern Aleppo countryside in order to repulse attacks by the Syrian Democratic Forces as Kurdish militias try to take control of the city.

The agency’s source added that Turkey permitted the fighters to move into Syria with heavy and light weapons – including mortars, rockets and tanks – and indicated that Turkish forces covertly escorted the fighters with their weapons and vehicles across the border before they headed to Azaz.

The Agence France-Presse quoted the Britain-based Syrian Observatory for Human Rights as saying that “no fewer than 500 Syrian fighters crossed the Turkish border into Azaz.” The Observatory’s head Rami Abdelrahman said that the crossing of the fighters was completed under the supervision of Turkish authorities.

But Colonel Ahmed told Al-Souria Net that “no fighter has crossed the Bab al-Salama border,” and added: “I am the official spokesman for the Levant Front, and I have issued no statement regarding the entry of Syrian fighters from Turkey.” Our correspondent, quoting opposition sources, denied that Syrian forces entered through Turkey into Azaz.

The Syrian Democratic Forces, led by the Kurdish People’s Protection Units and Women’s Protection Units, are fighting for the control of the last strongholds of the opposition forces in the northern Aleppo countryside.