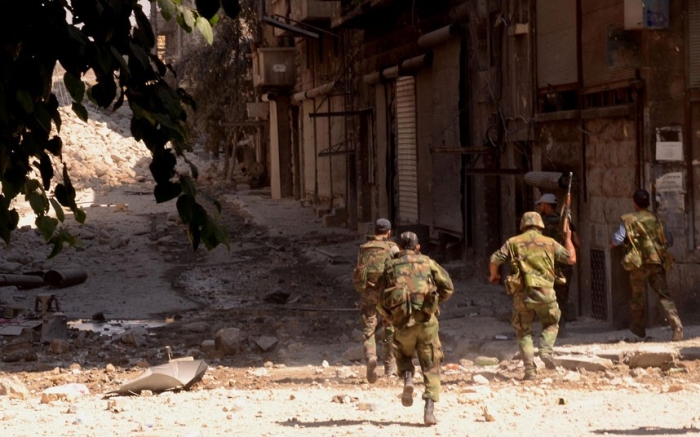 Fighters from the Jund al-Aqsa faction on Sunday night seized a number of positions from regime forces near the town of Khanasar in the southern Aleppo countryside, coinciding with another attack by the Islamic State group from the northern side of the town and its seizure of several positions, thereby cutting the Assad regime’s main supply route to Aleppo city.

Al-Souria Net’s correspondent in the Aleppo countryside, Mohamed al-Shafaei, reported that “units of Jund al-Aqsa were able to take control of the villages of Menayeh, Burj al-Zarour and Rasim al-Keraa in a long area north of the village of Khanasar, in addition to taking control of Telat al-Qera, allowing it to cut the regime’s main supply route to Aleppo.”

Shafaei added that while Jund al-Aqsa took control of positions in the southern Aleppo countryside, ISIS militants carried out a surprise attack on regime forces in the village of Rasim al-Nifl, near Sebkhat al-Jaboul in the Safira area and near the regime supply route from the Mamal al-Defaa area toward Aleppo. Heavy clashes continued between the two sides as the regime tried to retake the village.

The attack came after regime forces advanced in the northern sector of Safira and took control of more than 30 villages and farms at the expense of ISIS.

Our correspondent added that two rockets also fell in Siteen, one of them close to the points connecting opposition forces to the Kurdish People’s Protection Units in the village of Sheikh Eissa, northern countryside of Aleppo province, while a second rocket hit the outskirts of the city of Marea. No casualties were reported.