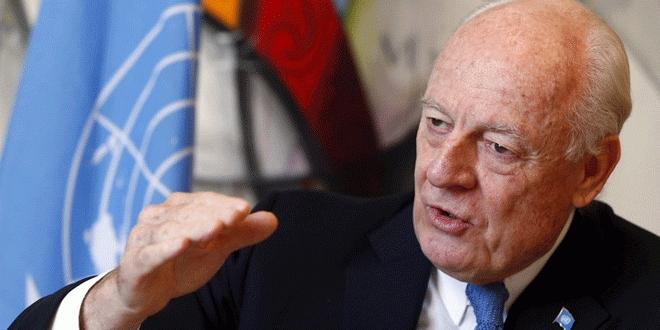 UN Special Envoy for Syria Staffan de Mistura said on Thursday the “cessation of hostilities” plan in Syria is holding but remains fragile after six days.

“The situation therefore could be summarized as fragile, success is not guaranteed but progress has been visible,” de Mistura told reporters.

He added that there were incidents where the truce was breached in parts like Hama, Homs, Lattakia and Damascus.

“The important thing is to start the momentum reaching the point when the political aspect will be addressed because that is what will make the endgame a stable one in Syria,” the envoy added.

The ceasefire in Syria started on Saturday in implementation of a Russian–US agreement adopted unanimously by the UN Security Council in accordance with Resolution 2268.

However, the agreement was breached 52 times by some terrorist organizations, according to the Russian center at Hmeimeem base that is coordinating the truce.

De Mistura said there are plans to start a round of Syrian-Syrian talks on March 9.