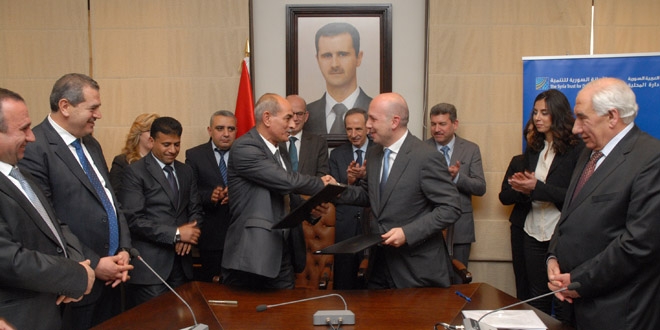 The deal will establish interest-free loan funds within several provinces to launch medium, small, and micro projects via the “My Project” program which was launched in 2011.

Deputy Prime Minister for Services Affairs Omar Ghalawanji said the agreement seeks to ensure the success of the relaunched “My Project” program by increasing the number of beneficiaries, in addition to allowing new partners and financers to become involved.

Ghalawanji said the program has special significance in light of the crisis in Syria, as it seeks to improve citizens’ living conditions by empowering them and alleviate the effects of the crisis, noting that the Ministry of Local Administration had allocated 15 million Syrian pounds of its investment budget for 2016 for cooperation with the program.

He pointed out that given the circumstances of the crisis, small and micro projects are considered the basis for rebuilding local societies and achieving economic and social development.

In turn, Secretary General of the Syria Trust for Development Fares Kallas said the program seeks to develop poor and weak areas in Syria by helping families start projects via interest-free loans, adding that displaced people who return to their homes will be the first to benefit from the program.

For his part, Damascus Countryside Governor Hussein Makhlouf said the program has already started work in seven out of 11 administrative zones in the province, with eight funds providing loans to 1,000 people, adding that the projects carried out via the program produced positive results, providing work for many locals.

Meanwhile, Tartous Governor Safwan Abu Saadi said the province ranks first in implementing the program, with the work team establishing 83 funds in five out of six administrative zones with an overall capital of 282 million pounds.

As for Homs province, Governor Talal al-Barazi said the program was launched at the end of 2013, and is operating in four out of six zones with a capital of 64 million pounds for 2015, adding that 70 percent of the projects that were carried out were related to agriculture and livestock, with women making up 40 percent of beneficiaries.

In a similar statement, Hama Governor Ghassan Khalaf said the program benefitted 2,483 people in the province in 2015, and that 70 new funds were set up in 2016 in four out of five zones with a budget of 289 million pounds.

In turn, Lattakia Governor Ibrahim Khedr al-Salem said the project began work in the province in 2014, and in 2015 its overall capital reached 95 million pounds distributed among 43 funds in four zones. The budget allocated for the 2016 program will more than doublt to 267 million pounds, adding that 55 more funds will also be established.

Suweida Governor Atef al-Naddaf said the overall capital for funds in the province is 411 million pounds, 216 million of which is allocated for 2016, with 123 individual funds, 21 of them new.

The meeting also included a review of the program’s achievements in 2015, the 2016 forecast, and its goals. The program targets 366 zones in 11 provinces and seeks to benefit 23,000 people, 40 percent of them women.