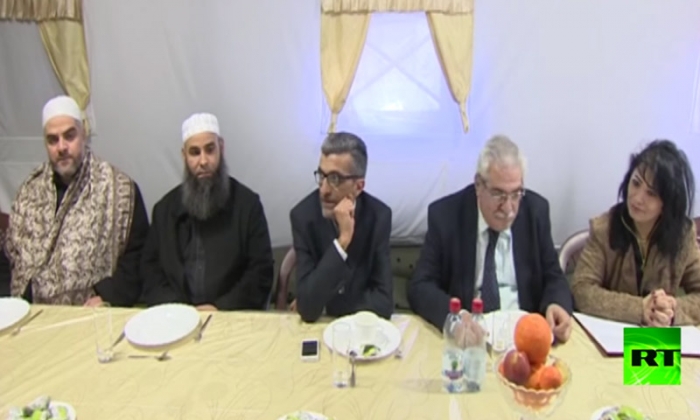 Syria’s so-called “internal opposition,” as coined by the Assad regime and Russia, have proposed the formation of a team to draft a new Syrian constitution during a meeting at the Hemeimem air base in Lattakia.

The Russian TASS agency on Saturday, March 5, published excerpts from the meeting, which was attended by representatives from the Movement for Democratic Syria and the head of the National Conference Party, in addition to religious figures and representatives of “armed Syrian opposition factions.”

The agency did not elaborate in its report concerning the representatives from the “opposition factions,” and was content to list Mayis al-Kiridi, the official spokeswoman for the Movement, who said that the situation of Syrians had begun to improve since the truce on February 27, and that Russia had brought peace to Syrians through its support for the ceasefire.

She stressed the importance of Russia and its role in ending the conflict by mediating between the conflicting parties, and the role of the political dialogue which will lead to drafting a constitution which protects all citizens’ rights, according to her statement.

Russia is trying to impose a number of names belonging to the “internal opposition” – the same list the Higher Negotiations Committee accused of loyalty to the Assad regime – in the stumbling Geneva negotiations during their first round on Jan 25.

Moscow had opened the Russian Reconciliations Center at the Hemeimem base as the truce went into force at the end of February, and circulated the email and telephone number of the room, along with a form addressed to opposition factions to encourage them, as a sign of their desire to comply with the ceasefire, to add the names of their factions to the list of the “moderate opposition.”