Foreign minster says topic is a "red line," adding government delegation will not have dialogue with any side to discuss the future of Assad 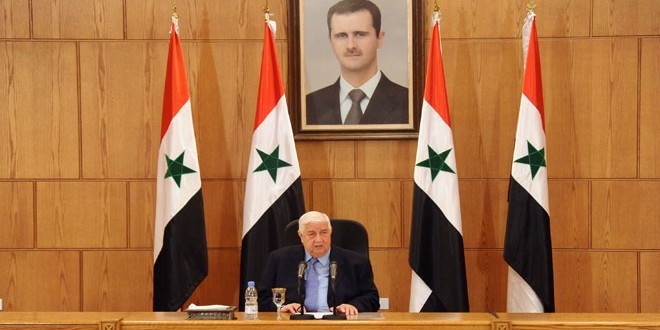 Foreign Minister Walid al-Muallem said Saturday that UN Special Envoy for Syria Staffan de Mistura has no right to talk about Syrian presidential elections, adding that the Syrian government delegation will not wait in Geneva forever for other parties to decide to show up.

During a press conference, Muallem said the Syrian government delegation received a letter from de Mistura scheduling Monday as the date for meeting at the United Nations headquarters in Geneva for the Syrian-Syrian dialogue.

“Meeting with our delegation at first is a good thing,” he said, adding however that the delegation “will not repeat the same mistake that happened in the previous round. They are going to wait for 24 hours only.”

“We are looking forward to having dialogue with the broadest spectrum of opposition groups in implementation of de Mistura’s mandate by the UN Security Council and the Vienna and Munich communiqués, particularly the national opposition… that is not linked to any foreign agendas,” Muallem added.

He commented on de Mistura’s recent statements outlining a schedule for the Geneva talks which he said will discuss the regime, the constitution and the parliamentary and presidential elections, saying the UN envoy does not have the right to set a schedule as it is something up to the dialoguing parties.

The foreign minister added that de Mistura must be aware, when he talks about the constitution, that it is the national unity government – a subject of future discussion – that will appoint a committee to draft a new constitution or amend the standing one, stressing that any outcome will be subject to referendum for approval.

Regarding the presidential elections, Muallem stressed that neither de Mistura nor anyone else can discuss the issue as it is “an exclusive right of the Syrian people,” dismissing the envoy’s comments as “a deviation from all the UN documents.”

“We will not have dialogue with any side that discusses the position of the president. This is a red line and it is up to the Syrians alone,” he reiterated.

“We will no longer accept that [de Mistura] gives up objectivity to please this or that party, and our delegation will reject any attempt to put this issue on the schedule,” he added.

Muallem referred to recent statements by Russian Deputy Foreign Minister Sergei Ryabkov regarding a federal system in Syria, clarifying that the statements were not quoted objectively by media outlets because Ryabkov made it contingent on the Syrians’ approval.

“I say as a Syrian citizen, and I’m sure you are with me, that we reject the talk about federalism and we are with the unity of Syria,” he added.

Muallem went on to say that the standing constitution will remain in place until holding a referendum by the Syrian people to renew or amend the document, reiterating that there is no link between the legislative elections and what is going on in Geneva.