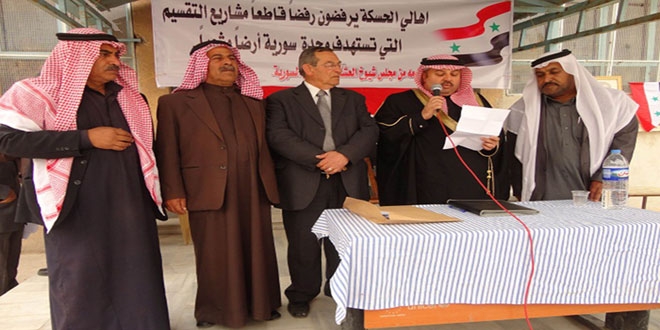 Popular figures in Hassakeh city announced on Sunday their rejection of the so-called “federal region in northern Syria” declaration and any project that would affect Syria’s unity and territorial integrity.

A statement issued at the end of a popular meeting in the Ghweiran district called for “No bargaining on the unity and sovereignty of Syria,” denouncing all measures and plans that may harm national unity.

The reaction came in response to the declaration of a federal region in northern Syria announced last week by figures who met in the northern town of Rmeilan.

The statement dismissed the announcement as “a step with dubious aims directly linked to the hostile imperialist projects.”

Participants at the Ghweiran meeting affirmed that Hassakeh province is an integral part of Syria’s geography, stating: “We will not accept any attempt to separate it from the Syrian body.”

They also stressed that Syria’s Kurds are an integral part of the national social fabric, calling for strengthening the bonds of national unity and the one-destiny principle.

The meeting was attended by a large number of economic, social and religious figures as well as locals from Ghweiran and Hassakeh city.

On Saturday, the Assembly of Tribes in Hassakeh province firmly rejected the declaration of the so-called “federal region in northern Syria,” saying such an attempt to undermine Syria’s sovereignty is doomed to fail.