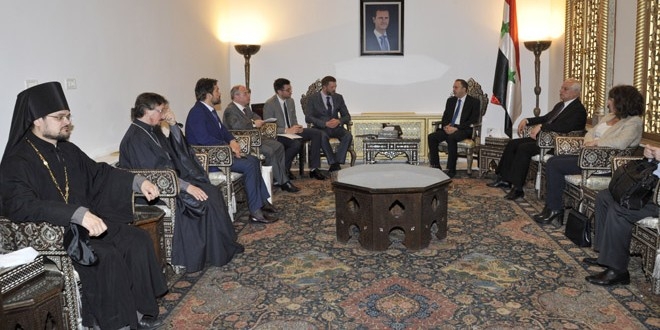 Syria’s parliament Speaker Mohammad Jihad al-Laham has hailed the stance of Russia’s government and its people toward Syria, during a meeting with a Russian parliamentary delegation on Sunday.

Dmitry Sablin, member of the Russian Federation Council Defense and Security Committee, said the purpose of the delegation’s visit to Syria is to consult with officials on the upcoming parliamentary elections due to be held on April 13.

He noted that Russia’s parliamentarians support this week’s elections in Syria and asserted that political development should be a right for all Syrians.

For his part, Sergei Gavrilov, chairman of the State Duma’s Committee on Property Affairs, said the delegation has witnessed the preparations for the upcoming elections and sensed strong competition among all candidates through their campaigns in all Syrian cities.

These elections, Gavrilov added, are in the interest of Russia, as Russian President Vladimir Putin has repeatedly expressed his support for legitimacy in Syria.