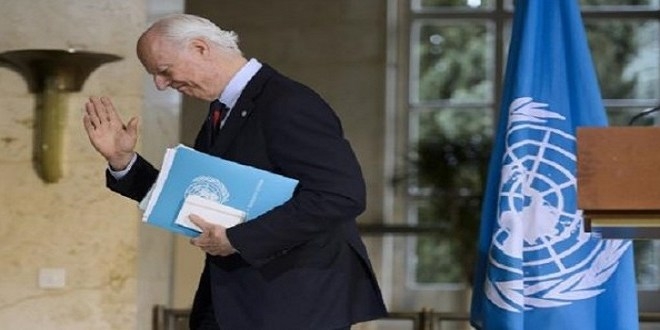 It can be said, based on the developments of yesterday morning – and before that, practically, specifically since the United Nations envoy to Syria Staffan de Mistura departed from the text of the agreements and international resolutions which make it imperative that a political transition be the focus of the third round of talks in Switzerland – that the “Geneva track” is at least frozen, or delayed, roughly as a result of the positions of the parties concerned with the Syrian issue, and especially the “international community” and the allies of the Syrian regime.

That is the situation regarding the truce, which ended Monday in a form that appeared almost official, and two weeks before that with the breaches of the regime and its allies reaching almost 2,000, without real or effective international pressure on the Syrian government and its Iranian and Russian backers.

The “offer” which de Mistura presented to the delegation of the opposition High Negotiations Committee – that the regime’s President Bashar al-Assad remain, with the appointment of deputies for him from the opposition, or forming an enlarged government including both sides of the political spectrum – may have been an official announcement of the death of Geneva, even before the opposition requested the suspension of Monday’s sessions after they departed from the agenda. This is what was demonstrated clearly in a press conference by the head of the regime delegation Dr. Bashar al-Jaafari, dedicated to the occupied Golan and to verbal threats which have been usual for decades against Israel, which intends to officially annex the occupied Golan to “its land.”

The more than 2,000 breaches of the ceasefire by the Syrian regime, Russia and Iran, which have occurred since its start (according to opposition factions) as well as the regime’s lack of commitment to releasing prisoners and to ending the blockades on besieged cities, the continuation of indiscriminate bombardment and targeting of camps, and the military escalation on all fronts, compared to the political circumvention of the article about forming the fully-empowered transitional governing body according to the Geneva declaration which was supported by international resolution 2254, all generated a political and practical conviction among the opposition towards suspending participation in Geneva and returning to the military track.

This conviction translated into two political and military steps: the opposition delegation’s request that de Mistura suspend the sessions if it does not adopt a clear agenda stipulating a transitional governing body as its basis – the opposition presented a paper on this (the full copy is on the website) – in addition to the armed opposition’s announcement of the military campaign to “Redress Injustices” in Syria.

It was expected that the general coordinator for the Syrian opposition’s High Negotiations Committee, Riyad Hijab, would hold a press conference outside the United Nations on Monday, after the delegation met the international envoy, to announce the suspension of the opposition delegation’s participation, but it was delayed according to information obtained by Al-Araby Al-Jadeed, while it seemed to head toward officially announcing a suspension of the talks after Hijab’s confirmation on his Twitter account that the opposition will not continue to negotiate amid violations of the people’s rights, violations of international law, imposing sieges, and bombarding civilians, as he put it.

In the same context, the practical conviction among the Syrian opposition was generated from the need to defend itself, according to the chief negotiator Mohamad Alloush, who called for fighting the regime forces which have not respected the truce in force since February 27. The head of the negotiating delegation Asaad al-Zouabi did likewise, calling for a response with 10 missiles for every missile launched by the regime’s forces. From here, the response on the ground came quickly indeed, with the armed opposition’s declaration of their new operation.