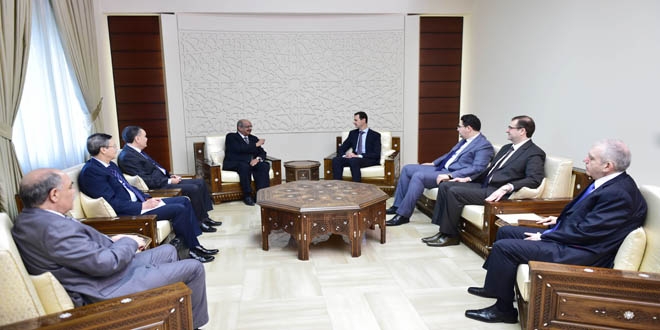 Terrorism is no longer a Syrian issue, but has become part of a political game aimed at debilitating the countries that are committed to their independent decision, President Bashar al-Assad said.

Assad’s remarks came during a meeting on Monday with a visiting delegation from the Syrian-Algerian committee for economic cooperation, headed by Algeria's minister for the Arab League Abdelkader Messahel.

During the the meeting, the two discussed the danger of terrorism and the need for unifying the efforts of all countries to fight the danger.

For his part, Messahel referred to Algeria’s experience in combating terrorism and extremism and achieving national reconciliations, stressing his country’s solidarity with the Syrian people and support for their steadfastness in the face of the terror war waged against them.

The talks, which were also attended by Minister of Economy and Foreign Trade Humam al-Jazaeri and Chairman of the Planning and International Cooperation Commission Qaiss Khodr, touched on the need to boost bilateral relations between the two countries in all fields, including enhancing economic relations and cooperation.

Earlier on Sunday, Messahel discussed means of enhancing cooperation with the Ministry of Economy and Foreign Trade, after meetings between Syrian and Algerian technical experts kicked off at the headquarters of the Planning and International Cooperation Commission on Friday.

Prime Minister Wael al-Halki also held a meeting with the Algerian minister in which he stressed the importance of activating pre-signed agreements between both nations, while Messahel expressed his government’s desire to further develop relations and open new channels for cooperation.