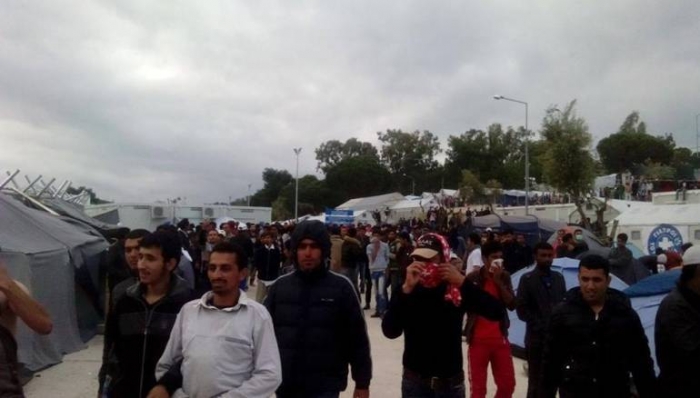 Thousands of Syrian migrants trapped on the Greek island of Lesbos clashed with police on Wednesday over allegations of repeated assaults in Moria camp, a migrant told Zaman al-Wasl via phone call.

Dozens of demonstrators were injured as the Greek police fired tear gas into the crowd of about 3,000 people to disperse the protest.

One Syrian asylum seeker said that some refugees have been detained on the island for 40 days, adding: “we are not told where they are going to deport us, they prevented us from passing through,"

The refugee confirmed that police assaulted some of the unaccompanied minors after they protested following the Greek authorities’ refusal to accept their application for asylum.

According to the eye witness, refugees responded by gathering around the minors’ prison to demonstrate, which quickly turned into rioting as some refugees started throwing stones. Police responded by shooting tear gas to disperse the crowd.

Following the controversial agreement between the European Union and Turkey on March 20, Moria camp now holds refugees who arrive in Greece via the sea from Turkey while their asylum applications are assessed.