Official sources report civilian deaths and injuries, including a pregnant woman, as shells fall on a number of neighborhoods of Aleppo and Deir-ez-Zor 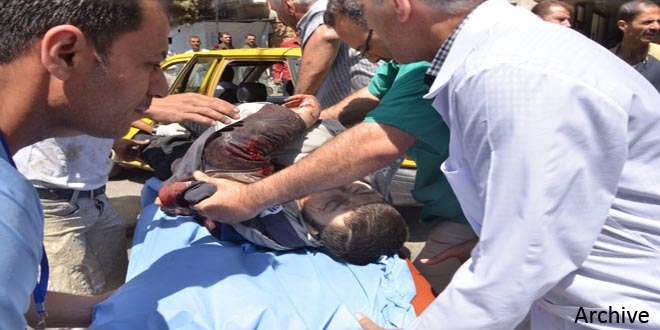 Terrorist rocket attacks on neighborhoods of Deir-ez-Zor city killed two civilians and injured three others on Wednesday, according to a source at the local governorate.

The source told SANA that terrorists of the Islamic State group fired several rocket shells on the Qusour and Joura neighborhoods in the city at dawn.

The attacks, according to the source, claimed the lives of two people and injured three others while causing material damage to property.

In a similar incident, a woman was killed and 35 others were injured in rocket attacks on residential neighborhoods in Aleppo city in a new breach to the cessation of hostilities.

A source at the Aleppo police command said that terrorist groups targeted the Shrafiyeh neighborhood with rocket shells on Wednesday morning, killing a woman and injuring four other civilians.

Some 17 other civilians were injured in attacks on Mogambo neighborhood, while another one was injured in shelling on the Hamadaniyeh neighborhood. The injured were taken to hospital for treatment.

Other rocket shells fired by terrorists on the Ramouseh neighborhood injured two civilians.

Earlier on Tuesday, seven civilians including a child and a woman were killed and 13 others were injured in terrorist rocket attacks and sniper fire in the suburbs of Hamadaniyeh, Ramouseh and New Aleppo.

The Russian center for monitoring the cessation of hostilities at Hmeimem airbase in Lattakia said it had registered 604 breaches by terrorist groups since the truce came into effect on February 27.