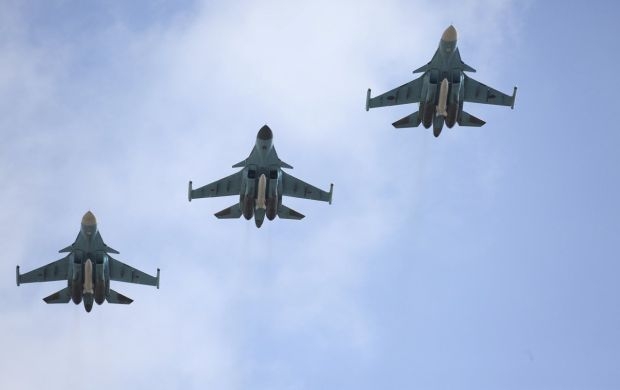 Lavrov warned that Russia will not approve any attempts on stalling air operations in Syria.

Moscow is “ready to coordinate our military efforts with the US in Syria,” but opposes “delays that enable terrorists to attack,” said Lavrov.

Speaking at a press conference on Monday with Finnish counterpart Timo Soini, Lavrov expressed his hope on the prospect of partners to play fair, and not attemping to take advantage of the situation to take on different schemes.

“We hope our US partners will honestly cooperate with us without seeking to implement plan B or C behind our backs,” he said.

As for the U.S., Lavrov considered that the Americans seem unable to hold the promises they made and thus demand that Russia and the Assad regime withhold their air campaign activities. The U.S. wishes to separate the Syrian opposition fighters from terrorists.

On top of that, Lavrov explained that Russia recognizes the difference between the Syrian opposition and the Nusra Front. However, Lavrov said that “Russia believes that the normal opposition had ample time since February to leave areas controlled by ISIS and the Nusra Front. Russia believes that those still in terrorist-controlled areas in Syria should blame themselves.”

Disregarding the U.S. warnings, Lavrov said that all those who have not escaped the terrorists have no one to blame but themselves.

“For many months the US has failed to deliver on its commitment to separate its loyal opposition groups from terrorists in Syria,” Lavrov added.

The U.S. had said that moderate rebel groups mingled with the terrorists in some areas and that Russia should use caution and not strike those groups by mistake.

Confirming that Moscow’s view will be carried out, however, Lavrov said that no Russian moves in Syria will strike the U.S. by surprise as they exchange information on a daily basis.

Most of the communication is exchanged by the Russian base in Hemeimeem, Syria, and the U.S. base in Amman, Jordan. The two bases are chiefly missioned to monitor the implemented ceasefire.

Despite Lavrov’s assertion to the ongoing Russian support being given to Assad regime forces in the Aleppo battles, Russian daily Kommersant gave away the spotlight to other battles witnessing Russian contribution, namely Raqqa battles.

Speaking of the Raqqa battles, Kommersant published that the Russian forces alongside the U.S.-led international coalition against terrorism have joined efforts for a sole target which is liberating Raqqa.

The Russian daily emphasized that despite Damascus, Washington and Moscow not officially declaring cooperation in Raqqa, most military experts agreed to the high possibility of such coordination.

Kommersant had also cited information on Russian military officers lending a hand in plotting offensives in Raqqa. Russians believe that the main target of counterterrorism in Iraq and Syria is dependent to advances in Raqqa.

A Russian military source had told Kommersant that the Russian airpower had provided support to Syrian forces bolstering the offensive in Raqqa. “Russian air strikes were what empowered the Assad regime forces to advance deeply into the Raqqa Province,” the daily reported.