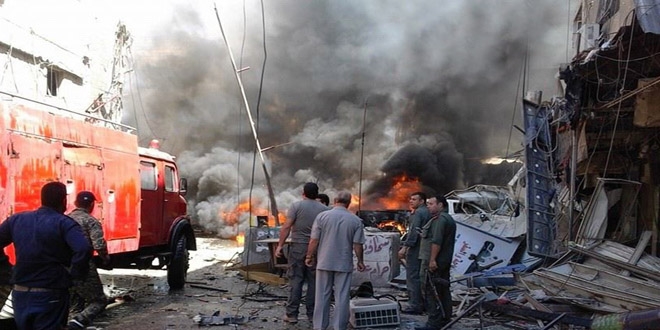 “Moscow strongly condemns yet another violent action of terrorists on Syrian soil. We express our condolences and compassion to family members and close ones of the victims and we wish a speedy recovery to all injured,” the Russian Foreign Ministry said in a statement on Sunday.

One of the two blasts which rocked the town was carried out by a suicide bomber who blew himself up at the entrance of the suburb in the direction of Ziabiyeh town. The other blast occurred when a car bomb exploded in al-Tin Street on the suburb’s outskirts.

At least 12 people died and 55 others were injured in the attacks, some of whom remain in critical condition, a police source from the Damascus countryside said, who noted that a number of women and children were among the victims.

SANA’s reporter said massive damage was caused to a number of houses and several shops caught fire due to the explosion.

In April, five people were killed and 20 injured when terrorists detonated a car bomb at the entrance of Ziabiyeh town in the Damascus countryside.

Prime Minister Wael al-Halki said the attacks are an attempt to destabilize these areas in a bid to boost the morale of armed militants following successive victories by the Syrian army.