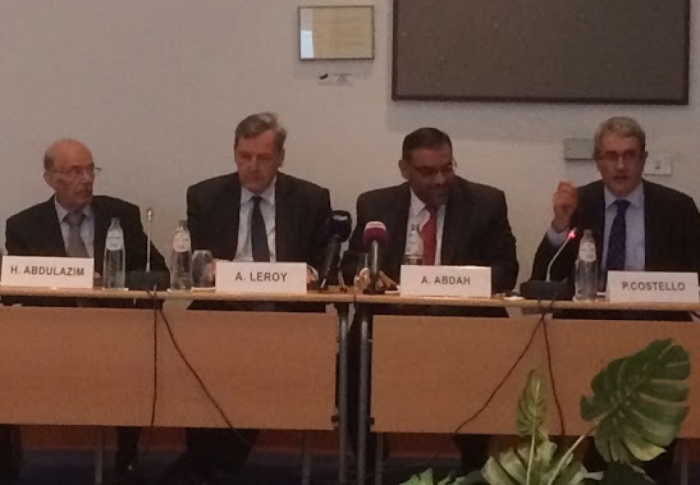 A delegation from the Syrian National Coalition met with the National Coordination Commission in the Belgian capital Brussels on Monday. The meeting, which was attended by the EU Secretary-General for External Action Service, Alain Le Roy, stressed the need for stepping up efforts to reach a political solution in Syria that achieves the aspirations of the Syrian people.

Coalition President Anas al-Abdah said that the continued targeting of civilians by the Assad regime and Russia had caused the Geneva negotiations to reach an impasse, adding that no one is able to force the Assad regime to respect the cessation of hostilities agreement.

Abdah lamented the fact that Russia is a sponsor of the political process and at the same time a partner in the crimes of the Assad regime against civilians, adding that there is no serious international response to violations of the cessation of hostilities agreement by the Assad regime and its allies.

Abdah urged the European Union to salvage the political process in order to reach a just political solution that meets the aspirations of the Syrian people. He noted that the monopoly of the Syrian file by the United States and Russia will not lead to positive results, citing the lack of progress in negotiations during the past six months.

The coalition president called for adopting effective mechanisms to reach a just political solution in Syria to restore stability and security to the region.

For his part, General Coordinator of the National Coordination Commission Hassan Abdel Azim stressed the need for ending divisions among the Syrian opposition in order to alleviate the suffering of the Syrian people. He said that that the meeting with the Syrian Coalition is part of efforts aimed to unify the opposition and come out with a unified vision for the future of Syria.

“Syria has been plagued by bloodshed and destruction of cities and towns by terrorist forces in control of some areas and by other sides that seek to impose a federal system in Syria,” Abdel Azim said. He stressed the need for the unification of the opposition and for greater representation of the Kurds in the Syrian opposition.

Abdel Azim pointed out that last week saw an initiative by the opposition’s High Negotiations Committee to hold dialogue with opposition bodies that did not attend the Riyadh conference. He described the Riyadh opposition conference as an important step towards the unification of the Syrian opposition.