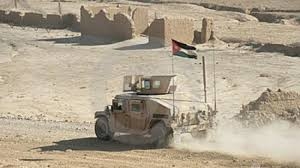 Syria strongly condemned the terrorist attack targeting a refugee camp on Tuesday in which six Jordanian soldiers were killed in a car bomb exposition near the Syrian border.

“This terrorist attack stresses once again that terrorism knows no borders and that no one is immune to it,” an official foreign ministry source on Wednesday, adding that Syria has repeatedly cautioned that terrorism will backfire on its supporters.

The source added that Syria has always stressed its readiness “to cooperate with the brothers in fighting terrorism and preserving the security and stability of the region.”

Six members of the Jordanian army were killed and 14 others were injured in a car bomb attack that targeted a military post near Rukban camp on the Syrian-Jordanian border.