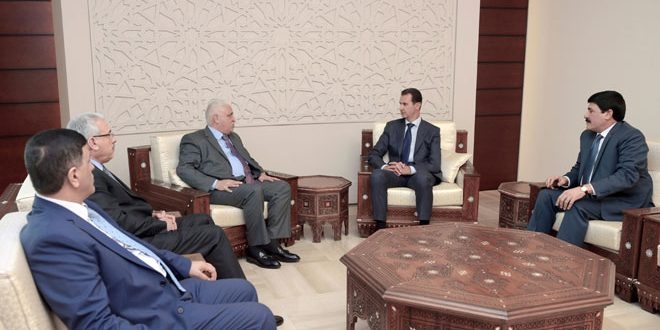 The armies of Syria and Iraq are fighting the same war against terrorism, President Bashar al-Assad told a visiting Iraqi official on Wednesday.

The president’s comments came during a meeting with Iraq’s National Security Adviser Feleh al-Fayad on political, military and security cooperation between the two countries.

Fayad stressed that Iraq’s leadership is committed to continuing its support, communication and coordination with the Syrian government against terrorist organizations.

Later, the Syrian president congratulated the Iraqi army and Popular Mobilization forces for the recent victories in combating the Islamic State organization, the latest of which was liberating the city of Fallujah.

Assad said that any victory against terrorism in any of the two countries is a victory for all sides which are serious about fighting and overcoming terrorism.