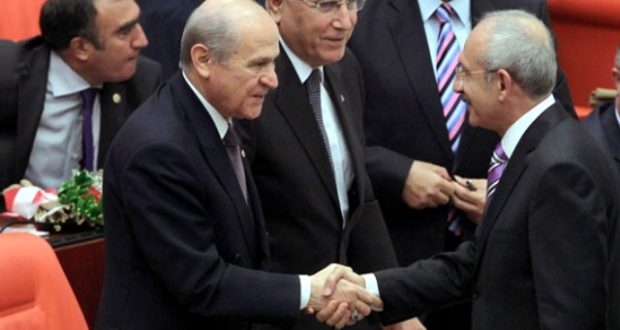 The leader of Turkey’s Republican party, the biggest of the Turkish opposition parties, issued calls on Tuesday to run a popular referendum on granting nationality to Syrians living inside Turkey.

Head of the Republican People's Party Kemal Kilicdaroglu said in his weekly address before his bloc in Turkish parliament in Ankara, “The war in Syria must end and it must be rebuilt, and then our brothers, the Syrians, can return willingly to their country. If we are able to establish this policy, we will have achieved a great success.”

He added: “We were surprised by the statement about issuing nationality to Syrians. According to what justifications will they be issued nationality? We have 6 million people without work and 17 million in poverty.”

He went on to say, “If you [a reference to Erdogan] are insistent on issuing nationality to them, we will run a popular referendum and ask the people about that.”

He added: “I am not against Syrians. They are our guests. We have sheltered them and shared our tables with them and have not asked them, ‘Why did you come?’ Because they were fleeing death. But not one of them wishes to remain in Turkey. They all want to go to Europe, to Germany, to France, Norway and Sweden.”

Kilicdaroglu said that Syrian refugees are given nationality then “this would upset the Turkish social fabric. There are also security dangers, for no one knows the terrorist but the terrorist himself.” He warned that any issuance of nationality to Syrians would open the way to tensions and polarization and create “ghettoes” in the major cities.

The Turkish Interior Minister Efkan Ala announced yesterday his country’s desire to speed up the process of granting Turkish nationality to Syrian families “who will benefit Turkey and Syria.”

Ala said in a parliamentary session in Ankara that his ministry would consider the files of all who apply to obtain Turkish citizenship, and will require that their records be free of crimes, as well as any indication that the person applying could threaten public security in the country, according to Turkish media.

Devlet Bahceli, head of the opposition Nationalist Movement Party, rejected the government’s move to grant nationality to skilled Syrian refugees, saying that Turkish nationality is not “a status to be granted according to the whims of the president or as a favor from him.”

Bahceli said in a speech to his party’s bloc in parliament that the issue of granting nationality to Syrians was politically motivated and aimed to win votes in the coming elections, calling the step, “irresponsible.”