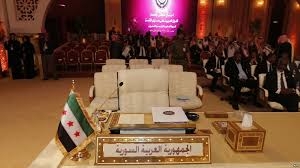 A source at Syria’s Foreign Ministry confirmed on Friday that Damascus has not made any request to return to its seat at the Arab League.

According to the source, Syria reaffirmed that it will not consider returning to the Arab League as long as it “remains subject to the dominance of countries known for having conspired against it.”

Secretary-General of the Arab League Ahmed Aboul Gheit recently announced that Syria could only receive its membership back after reaching a consensus between the government and the opposition.

Aboul Gheit also said Syria cannot take part in the Arab Summit in the Mauritanian capital of Nouakchott that is due to be held on July 25-26.

The ministry source said that Syria held the League responsible for deepening the crisis in Syria and hindering efforts to resolve it after the organization, under the influence of some dominant member states, took a dubious stance on the Syrian file.