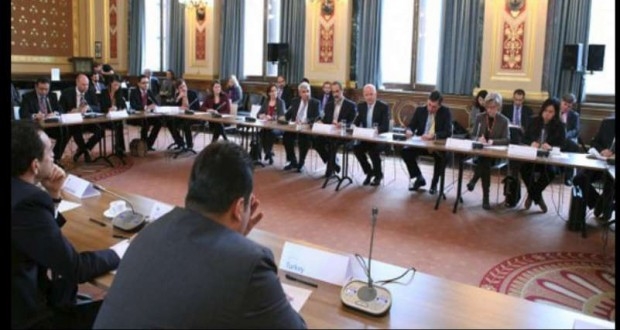 The High Negotiations Committee expressed its surprise at the state of ambiguity of the Russian-American deal on Syria, calling for greater transparency and credibility.

In a statement obtained by Madar al-Youm on Monday, the committee called on Moscow and Washington to carry out a thorough review of the operation to fight terrorism, and for Russia to distinguish between organizations it considers terrorists and civilians and factions of the Free Syrian Army, warning against the operation to fight terrorism turning into civilian massacres.

The committee condemned the Russian bombings of FSA positions and its participation with force in the regime’s aggressive operations alongside its allies against the Syrian people under the pretext of fighting terrorism.

The committee questioned Russia’s mechanisms for identifying terrorists in the areas of contact, and confirmed its rejection of any extremist forces in Syria, stressing that fighting them indiscriminately will subject all people to serious danger.

The committee held a meeting in Riyadh between July 12 and 15 in which it discussed the current regional and international developments, and the work of its councils, most importantly the council for dialogue and communication with constituents of the Syrian people and their social and political forces.

The statement said that the committee had studied the text of the document which it had prepared for discussion of its vision for the political process according to the Geneva statement, starting with the negotiating stage and ending with the transitional stage.

The committee opened its meeting with a eulogy for the martyred council member, Colonel Bakour al-Salim, who was assassinated “by criminal terrorists.” The committee put his name on the meeting hall.

The committee confirmed its compliance with the political process, and what was specified by the statement of the Riyadh conference, considering it a foundational document for unifying the visions of all opposition and revolutionary forces. The committee said that the halting of negotiations resulted from the regime’s insistence on what it called a military settlement and its rejection of a political solution.

It said that the negotiations required several elements, most importantly, respecting the international resolutions and complying with their contents, and especially with those connected with humanitarian issues and forming a secure popular environment guaranteeing the success of the political process.

The committee expressed its regret that calls for a truce throughout this past month of Ramadan and Eid al-Fitr were ignored, and said that it “called for a truce, but the regime, Russia and Iran dealt with this invitation with passivity and neglect and escalated their hostile actions against our people during the month of Ramadan.”

It said that the irony was that the regime announced a truce for the days of Eid, and then hurried to breach it through a series of massacres it carried out in Douma, Aleppo, Homs, Rastan, the Ghouta, and Idleb and its countryside.

In a related context, the military factions under the committee expressed the risk of ending military support for moderate factions in the war against terrorism, while the Islamic State group and other extremists are finding increased military and logistical support.

The committee confirmed its eagerness to work with the UN envoy Staffan de Mistura to make the political process succeed and thanked the friendly and brotherly countries who have advanced the cause of the Syrian people and supported their demands for freedom, dignity, and building a democratic civil state.