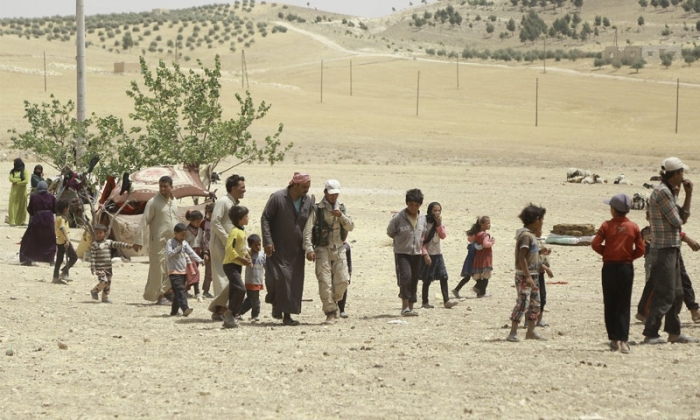 Syrian activists have launched calls for aid to civilians surrounded in the city of Menbij, east of Aleppo, due to ongoing fighting between the Islamic State group and the Syrian Democratic Forces, in which the latter are trying to take complete control of the city after storming it last week.

About 200,000 civilians live in Manbij — most of them displaced people from the neighboring areas — in tragic circumstances due to a shortage of basic goods resulting from the siege which has been imposed by the SDF on the city over a month and a half.

While hunger slowly kills the people of Manbij, it appears rockets of the international coalition warplanes are the fastest means of civilian death, alongside the clashes between the two sides inside residential districts of the city. On Monday, July 18, the deaths of 15 civilians were recorded in an air strike that targeted a civilian home.

ISIS and the Syrian Democratic Forces responsible for the siege of civilians have exchanged blame. The SDF has rejected accusations directed against it, claiming that the Islamic State group is the one preventing residents from leaving Manbij to surrounding areas.

The SDF pages on Facebook stated that civilian casualties were normal, saying: “We are in a state of war and it is normal for residents to be displaced and for there to be material and human damage. This is war, not a festival.”

Activists have used the hashtag #ManbijIsBeingSilentlySlaughtered recently with the aim of shining light on the suffering of the residents, while publishing content showing the terrible situation of the city and warning about a deterioration of the situation in light of the fierce fighting and scarcity of food.

Activists said that about 1,000 members of the Islamic State group were still fighting in Manbij, while the Syrian Democratic Forces have it surrounded from all sides amid an “unprecedented” media blackout.