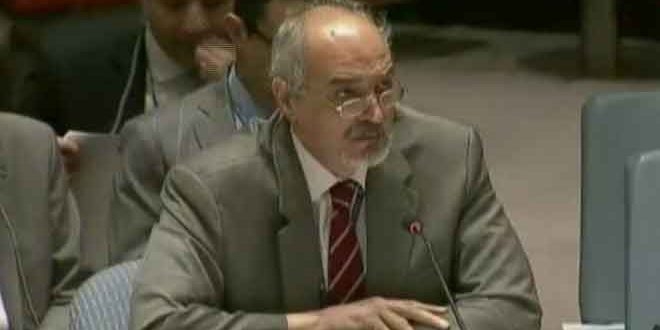 Syrian Ambassador to the UN Bashar al-Jaafari said on Monday that the suffering of the Syrian people cannot be stopped through political blackmail, affirming that the crisis will continue as long as the governments of Saudi Arabia, Qatar and Turkey continue to support terrorist groups which perpetrate massacres against Syrian citizens.

Speaking to the UN Security Council on the humanitarian situation currently facing Syria, Jafaari said that ending the civilians’ suffering must be done through fighting terrorism through UN resolutions in full coordination with the Syrian government.

“The solution is known to all which is represented by tackling the reasons behind the crisis imposed on the Syrian people,” the envoy said, pointing out that some sides ignore that terrorism is the real reason behind the humanitarian crisis and mass-internal migration to regions controlled by the Assad government.

Jaafari noted that Aleppo, during the first year and a half of the crisis, had never witnessed a single terror attack, adding: “We appealed to the Council’s member states to help the Syrian government put pressure on the Turkish government to seal its borders to prevent the terrorists from entering Aleppo, but nobody responded to that, which led to the entry of tens of thousands of terrorists of the so-called moderate opposition to the city.”

He stressed that the Syrian government didn’t close the strategic Castello Road, which connects opposition-held Aleppo with the outside world, but instead seeks to liberate it from the terrorists who exploit the route to prevent the humanitarian aid from entering Aleppo and Idleb, as well as to prevent terrorists entering from Turkish territory.

Jaafari wondered how some member states of UNSC could claim that they carry the banner of protecting the human rights, yet they reject the inclusion of a number of organizations on the designated terrorist lists, including the Nour al-Din al-Zenki group after fighters beheaded a young boy accused of spying for the government.

The ambassador said that the Syrian government cannot handle the duty of protecting its citizens and combating terrorism alone, “as we need your support as well as your understanding and realization of the volume of terrorism danger that we are facing in Syria, the region and the world, a danger that has started to reach your own countries.”