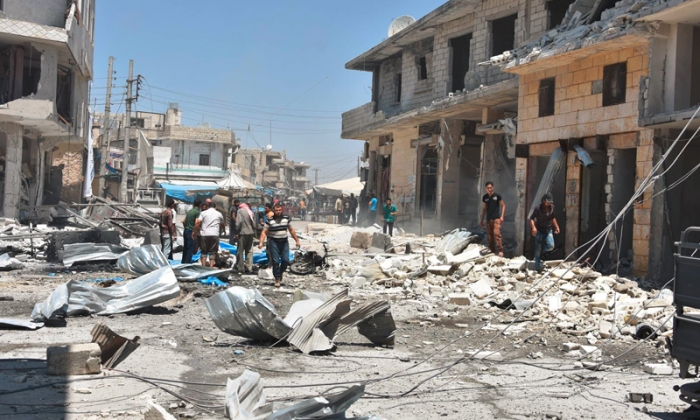 Warplanes carried out a massacre in the city of Atarib in the western Aleppo countryside on Tuesday, August 2, killing a number of civilians and wounding others.

Enab Baladi’s correspondent in the Aleppo countryside reported that the warplanes targeted the city’s market, killing more than six people and wounding dozens more, according to the preliminary toll at the time of writing.

The local coordination committees in the city documented the names of six civilian deaths as a result of the bombing, as well as the wounding of more than 20 other people.

The journalist Mohamed Said Hassan was wounded severely during heavy air raids that struck the city on Sunday evening, July 24, which killed about 25 civilians and wounded dozens of others. Activists said they were carried out by Russian fighters.

The warplanes stepped up raids on the city throughout July, causing the Atarib hospital to stop service on July 23, and killing dozens of civilians.

Regime forces have targeted Atarib and other cities and villages in the Aleppo countryside with rockets as part of their military escalation in the lead up to the “Great Battle for Aleppo,” causing the deaths of dozens of civilians.